There is a communist revival taking place in the world today. We see cultural Marxism rearing its ugly head in universities with the extreme left trying to shut down, sometimes violently, any conservatives who dare to disagree with their extreme left-wing opinions.

Put perhaps the clearest example of this swing can be seen in the communist resurgence taking place in China. In an article in the Washington Times, Bob Fu, President of ChinaAid a Christian organization that monitors human right abuses in China, said persecution of Christians in China has reached levels unseen since the days of Mao Tse Tung’s Cultural Revolution (1966-1976).

The persecution trend is veering upwards again in 2018 since the passing of a law on Feb. 1 requiring all churches to register with the state.  Earlier this year, the government dynamited the largest church in Shanxi province — the Golden Lampstand Church.  The government has also burned crosses, seized Bibles, censored Biblical passages and even set up cameras to monitor Church services.

But perhaps the most disturbing trend is the establishment of “re-education” camps for Christians and other religious groups popularized by Mao to brainwash China’s citizens.

Communism’s sudden resurgence was initiated by China’s ruling emperor for life Xi Jinping who is not only President of China, but is ruler of China’s communist party and commander of its military. Before 2018, China limited ruling presidents to two terms, but earlier this year Jinping changed the rules so he could rule indefinitely. 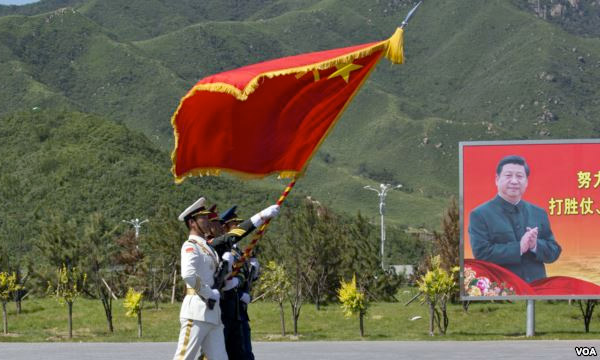 Similar to other tyrants, images of China’s current president Xi Jinping are starting to appear across the country. Credit: Voice of America/Wikipedia

And since he became leader, China has taken a radical turn towards communism.

May 5, 2018, marked the 200th anniversary of the birth of Karl Marx the founder of communism who was born in 1818 in the German town of Trier. In a speech commemorating Marx’s birthday, Jinping said:

“Today, we commemorate Marx in order to pay tribute to the greatest thinker in the history of mankind and also to declare our firm belief in the scientific truth of Marxism.”

The communist state also released a slick video honoring Karl Marx. The ad has Karl Marx in his white beard telling people in China to say “Say Hi to Marx.”  With Marx’s hand pictured with a “V” for victory salute, the ad goes on to say “Marx was correct.”

In April, the Chinese government also sent a 14-foot bronze statue of Karl Marx to the German town of Trier to commemorate Marx’s birth. Incredibly the town council not only accepted the statue but proudly installed it in the city.

How anyone could honor the man responsible for the murder and oppression of hundreds of millions of people reveals the deception in the world today.

The Black Book of Communism written in 1997 by various European academics sought to compile the number of people brutally murdered by Communists (in its various renditions) in the past century and put the number close to 100 million. The bulk of the genocides took place in the old Soviet Union under Stalin and in China under Mao:

But aside from the politics is there a spiritual root to communism? From the outset, you would think no.

Marx was an atheist and in the introduction to his book entitled A Contribution to the Critique of Hegel’s Philosophy of Right, Marx referred to religion as “the opium of the people.” He hated religion.

But aside from his prolific writings that called for a world-wide revolution, Marx also wrote poetry and it reveals a dark side of the founder of communism.

In several poems, we see Marx blatantly referring to the Satanic. Marx writes in The Player:

“The hellish vapours rise and fill the brain, till I go mad and my heart is utterly changed.

See this sword? The prince of darkness sold it to me.”

The poem, downplayed by his supporters, talks about a satanic violence associated with communism. Is it just a coincidence that this is exactly what happened?

But it doesn’t stop there. In a poem called Invocation of One in Despair, Marx writes:

So a god has snatched from me my all
In the curse and rack of destiny,
All his worlds are gone beyond recall, nothing but revenge is left in me.

I shall build my throne high overhead.
Cold, tremendous shall its summit be
For its bulwark — superstitious dread.
For its marshal — blackest agony.

When you combine the worlds “I shall build my throne high overhead” with words from a second poem where Marx declares himself equal with God:

Then I will be able to walk triumphantly
Like a god, through the rains of their kingdom
Every word of mine is fire and action.
My breast is equal to that of the Creator.

You see an unmistakable parallel with words of the prophet Isaiah who described the fall of Satan:

“But you (Satan) said in your heart,
‘I will ascend to heaven;
I will raise my throne above the stars of God,
And I will sit on the mount of assembly
In the recesses of the north. (Isaiah 14:13-14 NASV)

72 | Are governments and SPI-B behind the spirit of fear?

36 | Who are the two end times prophets?