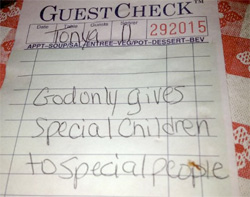 Ashley England of China Grove, N.C. has a special-needs, 8-year old child. The family was at a restaurant in the city on Friday, August 30, 2013 when their son, Riley, began to act up.

Riley was shouting and loudly banging the table. It was obvious a number of patrons were becoming agitated by the noise. Ashley was embarrassed and frustrated as Riley had been acting our more in public lately.

Then something incredible happened.

A person in the restaurant called over a waitress and secretly paid for Ashley and her family’s meal. There was also a special hand-written note on their bill.

The waitress was in tears and Ashley broke down herself. It had been a tough week for the family.

Ashley said, “They made me cry, blessed me more than they know. I felt like out of all the rude negative comments that we are faced with – these outweigh them.”

I was humbled by this act of generosity and kindness. Knowing myself, I could have easily fallen in with the irritated crowd.

Another anonymous note, a different tone 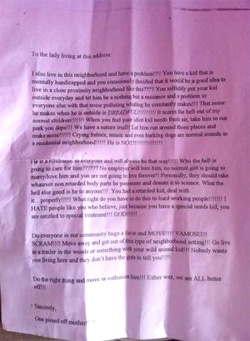 A copy of the second note: Twitter/lennonandmaisy

In a sharp contrast to Ashley’ note,  Brenda Millson also received an anonymous note. This one was pushed under the door of her home in Newcastle, Ontario in the second week of August. Brenda has an autistic grandson, 13-year old Max, who comes over to her house in the mornings. Max often plays on the trampoline in the backyard.

The note was signed by an anonymous mother in the neighbourhood.

Here are some excerpts from that letter:

You selfishly put your kid outside everyday and let him be a nothing but a nuisance and a problem to everyone else with that noise polluting whaling he constantly makes!!! That noise he makes when he is outside is DREADFUL!

It scares the hell out of my normal children!

He is a nuisance to everyone and will always be that way!! Who the hell is going to care for him?  No employer will hire him, no normal girl is going to marry/love him and you are not going to live forever!

They should take whatever non retarded body parts he possesses and donate it to science. What the hell else good is he to anyone!!!!

You had a retarded kid, deal with it — properly!  What right do you have to do this to hard working people!!!

Go live in a tralier in the woods or something with your wild animal kid! Nobody wants you living here and they don’t have the guts to tell you!!

The note ended with:

Do the right thing and move or euthanize him!!  Either way, we are ALL better off!!

I think few of us, myself included, appreciate the struggles parents go through with special-needs children.

But God knows and God bless them.